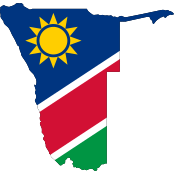 Pancontinental has been present in Namibia for the last ten years and during that time has built a solid foundation by working with the Government as well as local joint venture partners to further the exploration of Namibia’s offshore areas.

Namibia has an encouraging oil and gas regime and it is economically and politically stable. This has assisted the Company to conduct successful business activities there over the past decade. 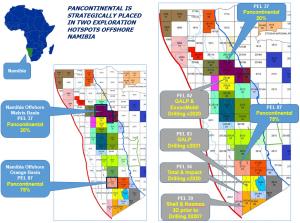 Namibia is under-explored with less than 20 offshore wells drilled over a coast line of some 1,300 km.

Offshore Namibia is part of the plate tectonic “conjugate” of offshore Brazil, where world-scale oil and gas discoveries have been made in recent years and it lies on the West African continental margin adjacent to Angola, where there have also been many major oil discoveries.

Offshore Namibia is an extension of the West African continental margin and in Pancontinental’s opinion offshore Namibia has the potential to hold very large oil and gas reserves and it is significantly under-explored.

On 20 May 2013 HRT Participações em Petróleo S.A. (“HRT” now PetroRio) announced that the Wingat-1 well adjacent to PEL 37 proved well-developed mature marine source rocks and a recovery of 1.8 litres of light oil from poorly-developed reservoir rocks. For the first time, the reported oil recovery and source rocks verified a working oil system in the Walvis Basin.

Pancontinental’s PEL 37 licence area and HRT’s former PEL 23 area are contiguous over the “Inner Graben” that is interpreted by Pancontinental to be a main regional oil generating zone and one of the most critical factors to finding commercial oil offshore Namibia.

The Wingat-1 is located in Petroleum Exploration Licence 23 (“PEL-23”), in the Walvis Basin, immediately south of Pancontinental’s PEL 37 area.

Since then various “oil majors” have taken positions in blocks on the trend supporting the high volume oil potential of the play that Pancontinental and partners have documented in PEL 37.